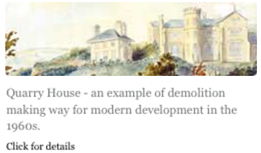 Who are we? Why did we start?

In the late 1950s James Burton’s Archery Ground and the scattering of grand houses within it were bulldozed to make way for a new Hastings College of Arts and Technology building.

A group of concerned local residents fought to stop this development and succeeded in saving the Burton Crescent to the south of the site from demolition. The group also successfully prevented an even more brutal scheme from being built.

Over the next 10 years (late 1950s – late 1960s) The Council’s planning department approved a series of demolitions of listed buildings to make way for modern developments. ‘Little Bloomsbury by the Sea’ seemed set for extinction.

The Burtons’ St Leonard Society, was formed by local residents in the late 1960s (officially registered in 1970) to stop this threat. Our campaign backed by various organisations like the Civic Trust and the Georgian Group resulted in the designation of Burtons’ St Leonards, as a Conservation Area by the local authority in 1969.